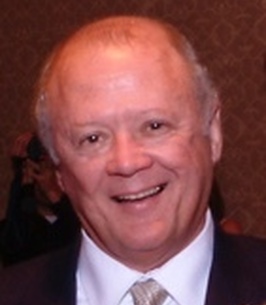 This is not an obituary. That has already been written – beautifully written – and appears elsewhere on this website. Rather, this is an attempt – limited by words and this writer’s skill – to talk a little about a man who meant so much to all of us who were privileged to know him: Pat Barrett, Jr., known to all of us as “Pat, Jr.”

I look now at the photograph that accompanies his obituary, and if a picture is worth a thousand words, then that is the case with this photograph of Pat, Jr., for his expression is one that all of us who knew him have seen a thousand times. I have seen that smile after he won a hand in poker, after he sank a winning putt playing golf – both usually against me – and after taking down a dove with an over-the-shoulder shot when we were boys. You look at the photo, and you are immediately struck by the joy that twinkles in those eyes and that is reflected in that utterly disarming smile: his joy and his love of life, of friends, of family, of practicing law, of Lexington. Pat, Jr.’s expression is indeed the expression of a man who knew how to be happy and how to love. And he did.

Having read the obituary – and if you haven’t read it, you should – the reader will know of Pat, Jr.’s many accomplishments: as a boy, as a man, as an attorney, but most of all, as an extraordinary human being. I would be remiss if I did not tell you of his service to all of us as a founding member of the board of this cemetery and as treasurer of this corporation. With his firm and steady hand, he steered our little boat through the financial and legal rocks and shoals of our early days into the bright open waters that we now continue to sail, and without his leadership and perseverance it is safe to say that we would not be where we are, or maybe, anywhere. To Pat, Jr., all of us who served on the board will always be grateful.

When you ask people what words come to mind when they think of Pat, Jr., one of the first is “smart.” And he was that. Harold Hammett, Jr. recalled to me once that the only time he ever made a better grade in a course than Pat, Jr. was in typing, where he recalls, Pat, Jr.’s fingers were too “fat” to hit just one key at a time. Other than typing, though, he was an exemplary student, always at the top of his class, but his intellectual brilliance was always tempered by a love of his fellow man so that he was never an overbearing, intellectual bully.

A second word that comes to mind is “funny,” and he was that -- in spades. Pat, Jr. was truly a joy to be around. Even when you faced him on opposing sides of a lawsuit, he could disagree without being disagreeable and indeed, could do it humorously in a self-effacing sort of way that smoothed out the rough edges of the lawsuit and that defused potentially volatile situations. That smile, that empathy for others that he possessed and projected, and that soft, mellow voice punctuated by his gentle Holmes County accent, disarmed many an opposing lawyer.

Competitive is another word that comes to mind. Pat, Jr. competed in everything he did, from football and track as a boy to golf, poker and practicing law as a man. But he competed well, competed the way that competition should be: never with vitriol, never with hubris, always with kindness and respect and compassion for those whom he bettered in whatever was the contest, or who bettered him, which was rarely the case.

I recall this special man in many ways: from our childhoods in West End beginning with a party at his wading pool when we were about three or four (we were born seven weeks apart). I remember him as a boy at the country club swimming pool, where he was later a lifeguard in high school. I remember him as an outstanding athlete, who had a breakout game as a halfback against Vaiden in 1958 (three touchdowns) and who quarterbacked the 1959 team to a nine-and-one record, losing only to the Ode Burrell-led Durant Tigers, our rival and oft-times nemesis. I remember playing poker in his and Don’s room at the Barrett home west of town and recall that Pat, Jr. stored his cards and most importantly, his money, in a wooden footlocker secured by a combination lock. All of us were envious not only that he had a footlocker, but even more so that he had some money to lock up in it. But he did, because he always seemed to win in poker with the deuce of spades in the hole in Low-Spade-In-the Hole-Splits-the-Pot or with a perfect sixty-four low in Seven-Stud-High-Low. Lord, do I remember those hands!

I recall him going to Red Top dances, with me, Bootsy, Tom Lail, Bubber Ramsey, Doyle Hale, Billy Gene Carroll, Edward Ellington and Billy Ellis, among others. Once, en route to some Delta Red Top dance, Pat, Jr. was on the front seat, in the middle, with me at shotgun and with the driver, Billy Gene Carroll, blasting his blue-and-white Oldsmobile 88 down the dark, narrow Delta road at outrageous speeds. On the backseat, Billy Ellis made up little rhymes about “Silly Gene,” who was not, we all knew, a boy about whom to make up silly little rhymes. We urged Billy Ellis to stop, as we saw the color rising on Billy Gene’s neck up into his ears and then out onto his face. We feared the worst, and the worst was not long in coming: Billy Gene let go of the steering wheel, turned and jumped onto the back seat, shouting, “Take the wheel, Pat, Jr. while I beat the hell outta Ellis!” Pat, Jr.’s eyes were almost as big as mine – which were about the size of Bugs Bunny’s – as he struggled to bring the wildly careening car under control, which, mercifully, he finally did, while on the back seat, Silly Gene did indeed beat the hell outta Ellis.

At Millsaps, as noted in the obituary, Pat, Jr. played quarterback, at the same time as did the All-American Jake Gibbs at Ole Miss. The Millsaps coach told Pat, Jr. at the first scrimmage that he was to run a play that called for him to roll out right. “We call the play,” the coach proudly told Pat, Jr., “Jake Gibbs right.” Pat, Jr. told the huddle as he called the play, “I bet Ole Miss has a play called Pat, Jr. left.” Another time, perhaps his senior year, he began alternating at both quarterback and wingback. Roger Lowery, now a physician in Tupelo, recalls that Pat, Jr. came into the game at wingback and brought a play from the coach to Roger, then playing quarterback. Pat, Jr. begged Roger, however, not to run the called play but to run instead a pass play to Pat, Jr, because he thought he could score on it and, as a quarterback, he had never caught a pass for a touchdown. Roger, convinced of the efficacy of the pass play by Pat, Jr.’s forceful argument, ran the pass play and indeed, threw a touchdown pass to Pat, Jr. The coach immediately yanked Roger, sat him on the bench, and Pat, Jr. played the rest of the game at quarterback. It was truly a case of killing two birds with one stone.

I played golf with Pat, Jr. many times, and I always admired how he loved – and respected – the game. And it was that quality – respecting the game – that set him apart from so many other golfers. Pat, Jr. always played his lie wherever the ball was; he never moved his ball to obtain a better, more hittable lie. For those of us who did not adhere to those strict standards, he never said a word, but observing him, most of us tried to rise to his standard of respect for the rules and traditions of the game. I was not with him on his most memorable day at the Holmes County Country Club a few years ago, when, playing with the now-deceased “Killdee” Killebrew, Pat, Jr. hit a fairway wood on the par-five number four hole, two-hundred-and-something yards up onto the elevated green and INTO THE DAMN HOLE! It was a double eagle, the rarest score in golf, rarer even than a hole-in-one. I forever after called him “Old Double Eagle,” after the professional golfer Gene Sarazen, who won the 1935 Masters with a double eagle on hole number fifteen. It was Pat, Jr.’s brightest moment playing golf, and he played many, many rounds with many, many people.

I could go on, but I will leave the storytelling here. In the end, Pat, Jr. faced his last fight with the courage that epitomized his life, and he faced that struggle not only with the same unrelenting courage that he displayed throughout his life, but with great, good humor, always reminding the listener – at least this listener – that he was at peace with his journey. It is not a journey into the night, into darkness, or down a dark narrow Delta road. Rather, it is a journey along a broad sunlit upland road to an eternally bright and happy destination where Pat, Jr. will be joyfully reunited with his many loved ones who have gone on before him. That is where he has left us to travel. That is where he has left us to live.

In the end, if a man’s life is evaluated on the basis of the service that he rendered to God, to his family and to his fellow man, then by that standard – indeed, I would submit, by any standard – Pat, Jr. long ago entered the pantheon of great men whom we have been privileged to know. And after all is said and done, what higher compliment can you pay to a man than to be able to say that he faithfully served God, his family and his fellow man with distinction and character and courage and wisdom and always, with great good will?

I believe there is none. Farewell my good and faithful friend.

Since I joined the LOFC team, I have often reached out to Pat, Jr. to edit my work. Whether a newsletter, letter, contract or deed, he was the master at editing. I told him that it must be due to his superior education at Millsaps. It was probably that he was just smart and had a keen eye for detail, for he never missed a spelling mistake or grammatical error of which I was often guilty. I am going to miss my sweet friend and colleague, as I know so many of you will. Simply said, he was a prince amongst men.

With the approach of the Fourth of July holiday – also known as Independence Day – it is timely to remember the origin of this holiday. It has been a federal holiday in the United States since 1941, but the tradition of Independence Day celebrations goes back to the 18th century and the American Revolution. On July 2, 1776, the Continental Congress voted in favor of Independence, and two days later delegates from the 13 colonies adopted the Declaration of Independence, a historic document drafted by Thomas Jefferson. From 1776 to the present day, July 4th has been celebrated as the birth of American independence, with festivities ranging from fireworks, parades and concerts to more casual family gatherings and barbecues. As you gather with your family and friends in whatever manner, the LOFC Board joins me in wishing you a safe and happy holiday.